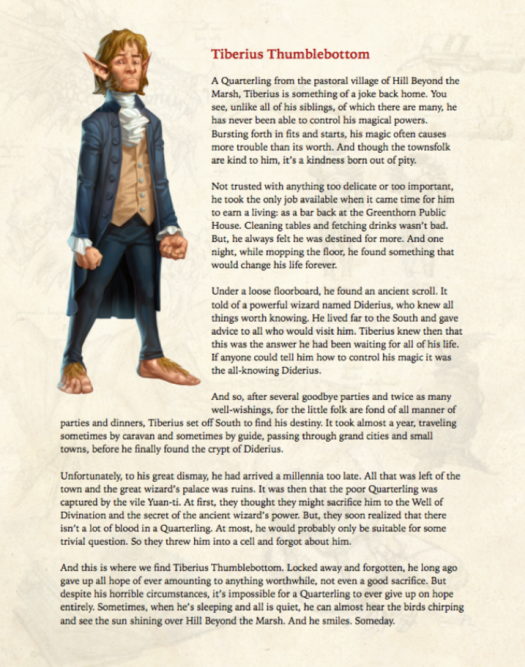 When you have a weekly gaming session (in our case on Saturday nights), you have to make allowances for family visits, emergencies, illnesses, and surprise out of town guests. Unlike when we were kids, there is a variety of “adulting” required today that can complicate things.  So, I have always tried to be flexible with my players. I recognize that it’s because of their generosity with their time that I even get to threaten them with devils from the Nine Hells in the first place. And recently, this flexibility created a rather unique opportunity.

One of my players had a guest visiting from out of town and didn’t want to miss our weekly session. So, he asked if there was a way I could include his guest “for one night only.” Thus, Tiberius was born. Essentially, I created a player character with a background already in place that our guest could just step in and play. It worked beautifully. The guest didn’t have to spend a great deal of time making a character. And I didn’t have to spend any time trying to “fit” the PC into the story. The whole thing fit together seamlessly.

As for Tiberius himself, he is based off of a previous player character from decades ago. The player never had much luck rolling dice and seemed to critically fail tests more than usual. So, his Quarterling rarely succeeded at a task. While we all loved the character, we all knew better than to trust him with anything too important. In this case, to mimic this random and sometimes disastrous result, I made him a wild magic warlock. But, instead of rolling on the Wild Magic Chart on a die result of one (1), he had to roll on the chart whenever he would cast a spell. It was epic.

A long time favorite of mine, I thoroughly enjoyed this chance to introduce him to a whole new gang. If you need an inept but friendly little warlock in your campaign, help yourself. My players can’t wait to meet him again.

In case you missed it